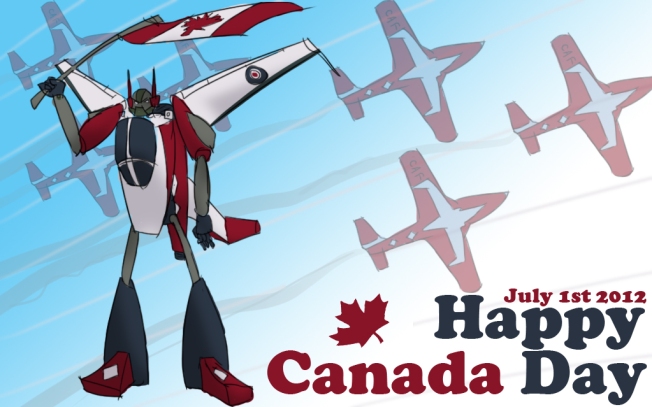 And so begins the WONDROUS ADVENTURE of a young married couple writing a blog about holidays, and drawing dumb pictures to give yah something to look at.  It’s fitting that the first holiday we celebrate is CANADA day, mostly because CANADA friggin’ rocks, but also because it is the country we are from.  But seriously, I love this country and our can-do mentality.

Take the snow birds for example.  Other countries?  they make aerial acrobatic teams out of F-18’s and F-16s (the blue angels and the thunderbirds hail from the land of the free…)  But CANADA? we’re like “Is it really that awesome to do acrobatics in a jet that costs millions and millions of dollars?  …Wouldn’t it be more impressive to do acrobatics in a jet that ISN’T really designed to be awesome?”  Anyways, i’m pretty sure the snow birds would make a pretty darn cool transformer… I would buy that toy.